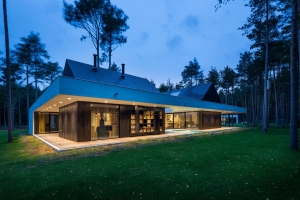 This year’s Concrete Day took place at the Film Museum where the Estonian Concrete Association announced the winners of the ‘Concrete Building of the Year Awards 2017’.

Watch an introductory video about the private residence:
https://www.dropbox.com/sh/zsuvsvq0f3fmp79/AADfkxLkV9GkIO8xuchNiqyCa?dl=0

The jury’s comment: „It’s a good example of how the customer knows what kind of building he wants and also finds the right constructors who will fulfill his ideas.”

The jury’s chairman Aadu Kana: „This house has a wealth of concrete secrets that are visible only to an extremely experienced eye. The idea and the implementation are very good.”

Photo galleries of winners can be downloaded here:
https://www.dropbox.com/sh/v8r23f11c240m9b/AACl3Q-HtQrvIhOGUG8Nld4Na?dl=0

Special Award for the outstanding architectural landscape design – Polar bear world of Tallinn Zoo – Joonas Sarapuu (Innopolis Insenerid OÜ).
The jury’s comment: „From the point of view of architecture and concrete it has an eligible place in the growing and renewing zoo. Excellent result!”

Special award for Architecture – Lutheri Ärimaja machine room – Hanno Grossschmidt (HG Arhitektuur OÜ).
The jury’s comment: „For preserving and exhibiting the historical concrete architecture. Excellent cooperation between the constructor and the customer. A reasonable compromise between the demands of heritage protection office and the needs of the new concept.”

The jury’s chairman Aadu Kana: „An excellent example of unison between old and new. The old concrete of the Luther’s factory, dates back to 1912, has been dignifiedly preserved. An important example of industrial architecture has been preserved for the future.”

Special Award for the design solution – Hans Hubert Sams – Rocca al Mare School’s open-air classroom Ateena.
The jury’s comment: „For an original idea that got an excellent architectural implementation. This open-air classroom is the outcome of good will and cooperation; it has a versatile range of applications and is visually appealing to the eye.”

The jury’s chairman Aadu Kana: „The idea of the classroom originates from the high schooler Hans Hubert Sams. His idea was fitted into the school’s existing environment by the author of the school Emil Urbel. The construction of it was carried out by the parents of schoolchildren, among whom we can find a number of well-known concrete men.”

The Ehitusuudised.ee (Äripäev) Readers’ Award goes to – Polar bear world of Tallinn Zoo and its constructor is – Astlanda Ehitus OÜ.

The Special Award of the Estonian Association of Civil Engineers goes to – Martin Meisalu (Järelpinge Inseneribüroo OÜ) – the designer of the tram line infrastructure up to the Tallinn’s Airport. 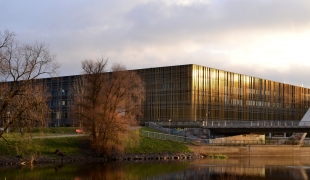 The Delta Center was opened this week in Tartu. 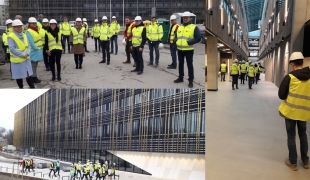 Thank you to the TMB Element men on the International Men’s Day!